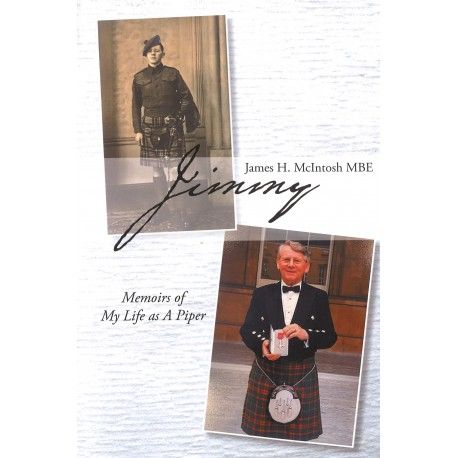 In the year 1925, James McIntosh was born into humble beginnings, in a two-room structure that would soon house a family of seven. His home was a stone's throw from the beach in Broughty Ferry, then a thriving fishing village on the east coast of Scotland. This was a time of strict social obedience and even stricter social mores. Children were to be seen and not heard. They were expected to obey the man of the house without question or cavil.

Thus did Jimmy find himself put to the bagpipes by his father and then packed off to the army as a naive teenager. He left behind brothers, sisters, and friends, as well as the familiar stretts, buildings, and shoreline of his boyhood. Forced to depart the only environment he had ever suitcase and pipes in hand, not knowing what fate awaited him.

Never one to give in easily, Jimmy determined to see it through, to make the best of his lot. He saw action during WWII and, after demob; proceeded to carve out a life for himself and his family.

Though lacking formal education, he never stopped studying and working to be the best at his music. He sought out the finest instructors and became a successful competitor in world-class competitions. He soon became a mentor to dozens of piping students and helped them to do the same.

Never satisfied to "rest on his laurels", Jimmy was always looking for new projects to share his knowledge and passion. One of those was establishing the world's first piping professorship at Carnegie Mellon University in Pittsburgh, Pennsylvania.

He traveled internationally, giving recitals, teaching, adjudicating, and organizing piping schools. Such was the success of his work that he was recognized by Her Majesty Queen Elizabeth II, who, at Buckingham Palace, presented him with an MBE for his services to bagpipe music.

In this memoir, Jimmy paints a picture in words of his lifelong dedication to his art, the people he met along the way, and the ups and downs in his life, both personal and professional. He writes as if you are sitting in the room with him, chatting by the fire. This touching memoir provides a link with the past, and through one man's vivid telling of his story, we learn how we can enrich our own.

Réalisation Dream me up